Home Research General Analysis of the Vietnamese’s Perceptions on Higher Education in Vietnam By...

Participants in the survey: 1000 people. The sample is scattered as follows: One interesting fact is that 100% of all pulpils and students in Ha Noi answered that they fully understood the purpose of pursuing university education. According to the survey, the main reason for pursuing higher education is to earn a degree (85%) This result also reflects a paradigm that earning a degree is crucial to the people in the capital, for they believe that a having degree equals high social status and a well-paid salary.

All 8% of high school students in rural areas and 5% of parents in rural areas who responded that they do not know the purpose of pursuing higher education have family backgrounds in the agriculture sector or other sectors (mostly freelancers).

Up to 4% of students in public universities and 1% of students in private universities said that they did not know the purpose of pursing higher education. The greatest drawback today is that, although high school instructors teach their students about the purpose of pursuing a higher education (e.g., sharpening skills, increasing the chance of having a well-paid job, or cultivating practical experience and knowledge), when these students finish their first semester at university, 5% of them begin to doubt the real purpose of pursing higher education. They claim that a big gap exists between what the schools say and what the schools really do. They advance their reasoning by saying that the number of unemployed fresh graduates has increased (in 2015, the number of unemployed university graduates was 150,000, in 2016 the number was 220,000, and in the first half of 2017, the number had increased to 44,000).

In urban area, students and parents have a less conservative point of view: 29% of students and 18% of parents in urban area would choose private universities. They reason that private universities are better-equipped with modern facilities and have an English-speaking environment. These families belong to the entrepreneurial, health, or education sectors with annual incomes of 100-500 million Vietnam dong (app. 5,000-25,000USD).

The preference between public and private university is not clear among university faculty. Although those who are currently working in public institutions tend to advise their students to choose a public university, private university faculty advise them to choose private schools. A further survey revealed that the 49% of lecturers who chose public university are more than 50 years old. They earned their higher education in the Union of Soviet Socialist Republics (USSR/Soviet Union). In contrast, the 81% of lecturers who preferred private university are between 27 and 49 years old, and have experience of studying or working in the United States, Singapore, Korea, Japan, France, Germany, Italia, Australia, and England.

There is a new trend: 10% high school students and 20% university students express their regret of pursing higher education, and choose to apply for a job when they finish their high school because they realize that Vietnamese higher education plays no role in guaranteeing a better career. These students (88%) have family incomes of less than 50 million Vietnam dong per year, and 12% continue to belong to the well-educated group, whose parents work in the education sector with annual incomes of 50-100 million Vietnam dong. These parents guide their children to choose “labour export” for three reasons: (a) gaining work experience, (b) learning one new foreign language, and (c) earning a substantial amount of money. They doubt the quality of Vietnamese education, but their financial status does not allow them to have their children pursue higher education abroad.

Studying abroad is popular in urban areas, with over 50% of students, parents, and teachers. However, in rural areas, only 7% of high school students want to study abroad. They come from wealthy family with an annual income of 100 to 500 million Vietnam dong (app. 5,000-25,000USD) and are guided by their parents. The main reasons for this trend are (a) inscreasing their chances of finding well-paid jobs and (b) having residency in another country (the countries that are mentioned the most is the United States and Australia).

This figure reveals that the “American dream” idea is still popular among the Vietnamese, and that many Vietnamese want to live in the United States because of its prosperity, freedom, and public benefits.

Fifty-one percent of the participants choose the United Kingdom and Australia because they have relatives there. One hundred percent choose Finland because Findland has a low tuition fee and many financial aid programs for international students. 72% choose Singapore because they want to increase their core competencies in future career.

The factors vary among different groups. Eighty percent of faculty and parents said that the parents chose the universities for their children.

Education quality and the rate of students finding good jobs after graduating were the two main factors affecting choice of university. Especially, the prejudice of “government-sponsored” was still popular among high school teachers (78%) and parents (79% in rural and 42% in urban), while this percentage was low among students (1% of students in urban area and 3% of university students in private institutions)

Nearly 10% of students and parents in rural area expressed their concern about facilities when applying to university because they believe that facilities do not affect the quality of education, and a low tuition fee is synonymous with ill-equipped facilities.

By contrast, students and parents in urban area and high school teachers and university faculty pay great attention to university facilities. They believe that modern facilities have a great impact on teaching and studying.

The factors that affect the students’ choice of university in Ha Noi were similar to trend in southern Vietnam. Thirty-five percent of all participants paid attention to whether the universities were sponsored by the government, 28% noted the years of establishment, and 17% noted the rate of graduates having well-paid jobs.

A stunning figure was that 0% of 800 participants responded that they believed that the quality of Vietnamese education is good.

Many participants agree on the two biggest drawbacks of Vietnamese education: (a) the outdated and complicated procedure of admistration, and
(b) too many theoretical courses. Furthermore, the restriction in the number of matriculated students and the loosely regulated graduation requirements have led to 250,000 unemployed graduates.

Many factors are responsible for the low quality of Vietnamese education: (a) bad facilities, (b) a large number of students in a classroom,
(c) an abundance of theoretical Marx-Lenin philosophy courses, (d) the dictatorship of Moet, (e) a lack of well-qualified faculty, (f) a boom in fake certificates service, and (g) fast-changing regulations.

When asked about bribery, 80% of high school students and parents said that this is a bad deed and has negative effect on education. However, nearly 50% of university students, teachers, faculty, and parents in urban areas said that this is an essential act to achieve one’s goal. Nearly 58% of parents in urban area, 30% of high school teachers and university faculty, 20% of university students believe that bribery is obvious, everyone does it.

85% of all participants in Ha Noi agreed with the practice of bribery, and 12.5% said that this is a bad deed and has negative effect on education.

Almost (80%) participants wish to see positive changes in the quality of the education system, including the quality of faculty, more practical academic curriculum, and the cancellation of Marx-Lenin subjects.

More than 50% of the participant agreed that today students’ extracurricular activities are superficial and emphasize political propaganda. Nearly 30% said the quality of these activities is acceptable, but only needs slight changes. The remaining said that they do not pay attention to these activities.

Although 70% of parents, pulpils and students recommended that these activities should not be obligatory, only 20% of teachers and professors agreed with that suggestion. More than 80% of participants agree with three recommendations to change the current situation: (a) emphasize quality,
(b) encourage creativity, and (c) give freedom to students to organize their own activities.

Conclusion 1: Regarding the purpose of pursuing a higher education, high school pulpils are taught carefully; however, when these students enter university, after one semester, they begin to doubt and worry about the true purpose of university. The current methodology in Vietnamese schools is for the teachers to read and the students to transcribe. Many university students are anxious when they see that too many new graduates become unemployed and have no practical skills, while the money, time, and effort that are spent in university are too high.

Vietnamese university requires the students to choose majors before they apply to university and, if they want to change majors during their studies, they have only one way to do it: to retake the university entrance examination and begin all over again. This is a great waste of money and time.

Recommendation: There should be job orientation sessions for freshman, and opportunities should be created for them to explore different majors during their first 2 years at university so that they will know for sure what they really like and who they really want to become before they must decide which concentrations they should follow. This is what the liberal arts model offers.

Conclusion 2: According to the result of participant’s preference in choosing university, it can be safely concluded that a prejudice exists against private university. This prejudice has its root in the history context: since the Independence Declaration in 1945, Northern Vietnam chose to develop a subsidized economy, and most sectors were sponsored by the government. Private business had almost no standing in the society. However, a good sign is that a paradigm shift has occurred among the participants whose family members are well-educated and have annual incomes of 100-500 million Vietnam dong (app. 5,000 – 25,000USD).

The government sponsorship for public schools has created unequal competition between two sectors, making public university pay more attention to recruiting a large number of students each year, instead of developing its academic excellence. As a consequence, hundreds of thousands of graduates from these institutions are unemployed.

Recommendation: There should be equal competition between public and private universities. Every school should be financially independent. This would lead to a focus on quality, encouraging every school to develop academic excellence to attract students.

Recommendation: There should be a revolution in education, including: 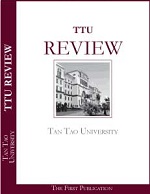 TTU-Review is published online and on the quarterly basis. For the first few issues, it would circulate internally in order to perfect the electronically operation and management. The managing staff is composed of the Chief Editor, Technical Editor, IT Manager and a Editing Council that includes Deans, Registrar, Department Chairs, Office Directors. Each contributor has to observe the Intellectual Property Laws and Regulations and be responsible for the academic standard for his (her) article. The copyright of the article will be discussed with each contributor before publishing.